What are async migrations?

Async migrations are data migrations that do not run synchronously on an update to a PostHog instance. Rather, they execute on the background of a running PostHog instance, and should be completed within a range of PostHog versions.

You can check the PostHog blog for more information about how and why we enable async migrations on PostHog.

Further internal information about async migrations can be found in our handbook.

Why are async migrations necessary?

Migrations are inevitable, and sometimes it may be necessary to execute non-trivial schema changes that can take a long time to complete.

For example, ClickHouse does not support changing the primary key of a table, which is a change we were forced to make in anticipation of upgrading ClickHouse beyond version 21.6. As a result, the way to change the schema of the table was to create a new table and insert all the data from the old table into it, which took us an entire week to run on PostHog Cloud.

Now, while we at PostHog can execute such changes to our Cloud instance "manually", we felt compelled to provide a better approach for our users to do so.

As a result, we created a system capable of safely and efficiently managing migrations that need to happen asynchronously.

Managing async migrations is a job for self-hosted PostHog instance admins. These migrations require some level of supervision as they affect how data is stored and may run for long periods of time.

However, worry not! We've built a system to make managing these as easy as possible.

Make sure you're on PostHog App version 1.33 or later.

To manage async migrations, you must be a staff user. PostHog deployments from version 1.31.0 onwards will automatically give the instance's first user "staff status", but those who have deployed PostHog before 1.31.0 will have to manually update Postgres.

To do so, follow our guide for connecting to Postgres and then run the following query:

To confirm that everything worked as expected, visit /instance/async_migrations in your instance. If you're able to see the migrations info, you're good to go!

We've added a page where you can manage async migrations at /instance/async_migrations.

Here's a quick summary of the different columns you see on the async migrations table:

The settings tab allows you to change the configuration, e.g. whether async migrations should run automatically.

How can I stop the migration?

In the async migrations page at /instance/async_migrations you can choose to stop or stop and rollback the migration from the ... button on the right most column. 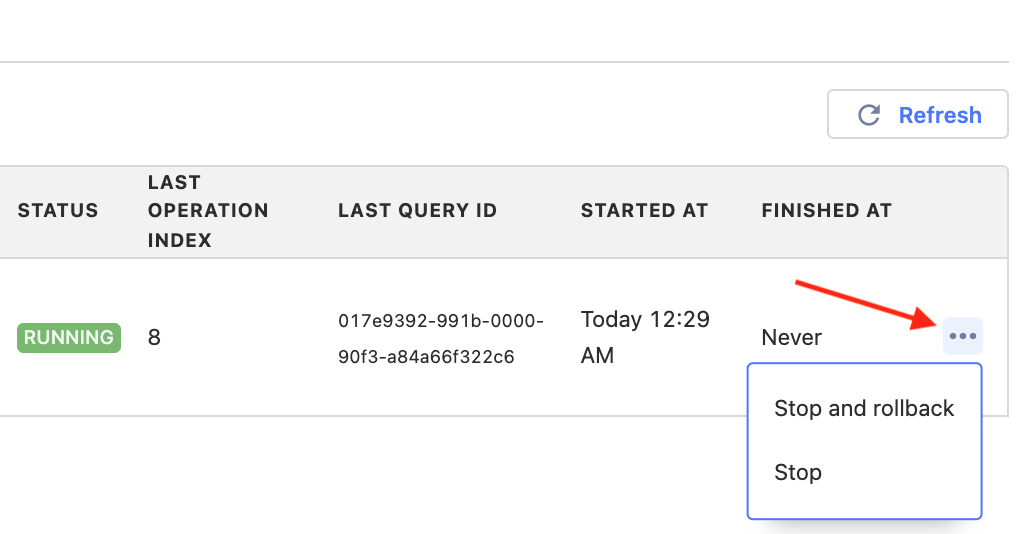 The migration is in an Error state - what should I do?

Try to rollback the migration to make sure we're in a safe state. You can do so from the async migrations page at /instance/async_migrations from ... button on the right most column. If you're unable to rollback reachout to us in slack.

You can scale in two ways:

Once the migration has run, you can scale the pod back down.

This means you were trying to update to a version that requires these async migrations to be completed.

The table below lists out recommended PostHog app and chart versions to use for updating to if there's a need for a multi step upgrade.

Before following the normal upgrading procedure update the .env file to have POSTHOG_APP_TAG match release-<desired version>. For example run

To upgrade to a specific chart version you can use --version <desired version> flag, e.g.

Make sure you have followed the upgrade instructions for your platform (specifically major upgrade notes as needed).

0001_events_sample_by is a no-op test async migration. Note that on PostHog version 1.32 we automatically continue to run other migrations after a successful completion.