Note: Feature Flags are currently available with our JavaScript and Python libraries. We're working to support this feature on all of our libraries, but, for the moment, you can also use our API to implement feature flags in your backend.

For a comprehensive step-by-step tutorial on how to use feature flags, check out How to safely roll out new features. 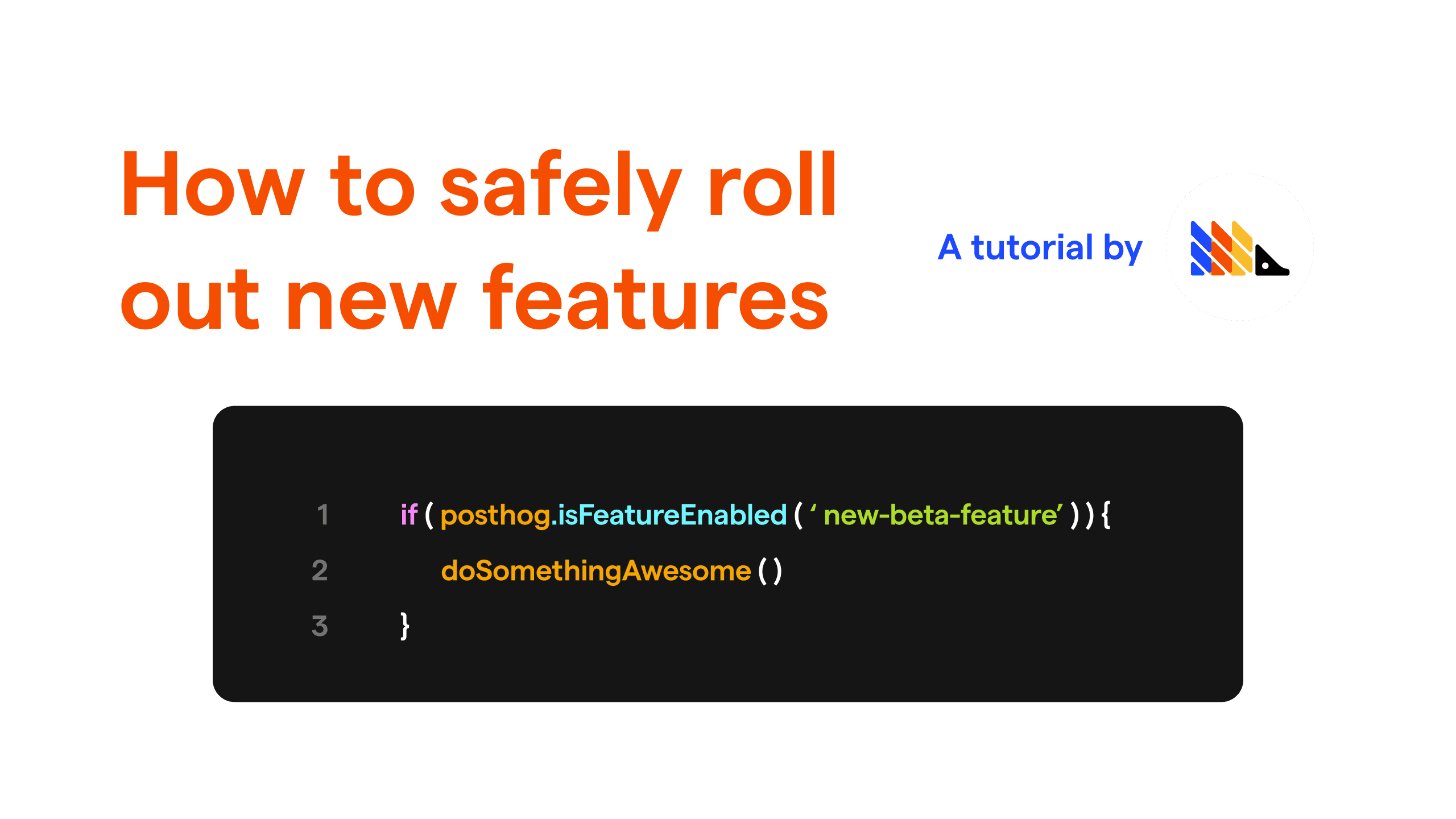 In the sidebar, go to 'Experiments' and click '+ New Feature Flag'.

Think of a descriptive name and select how you want to roll out your feature. 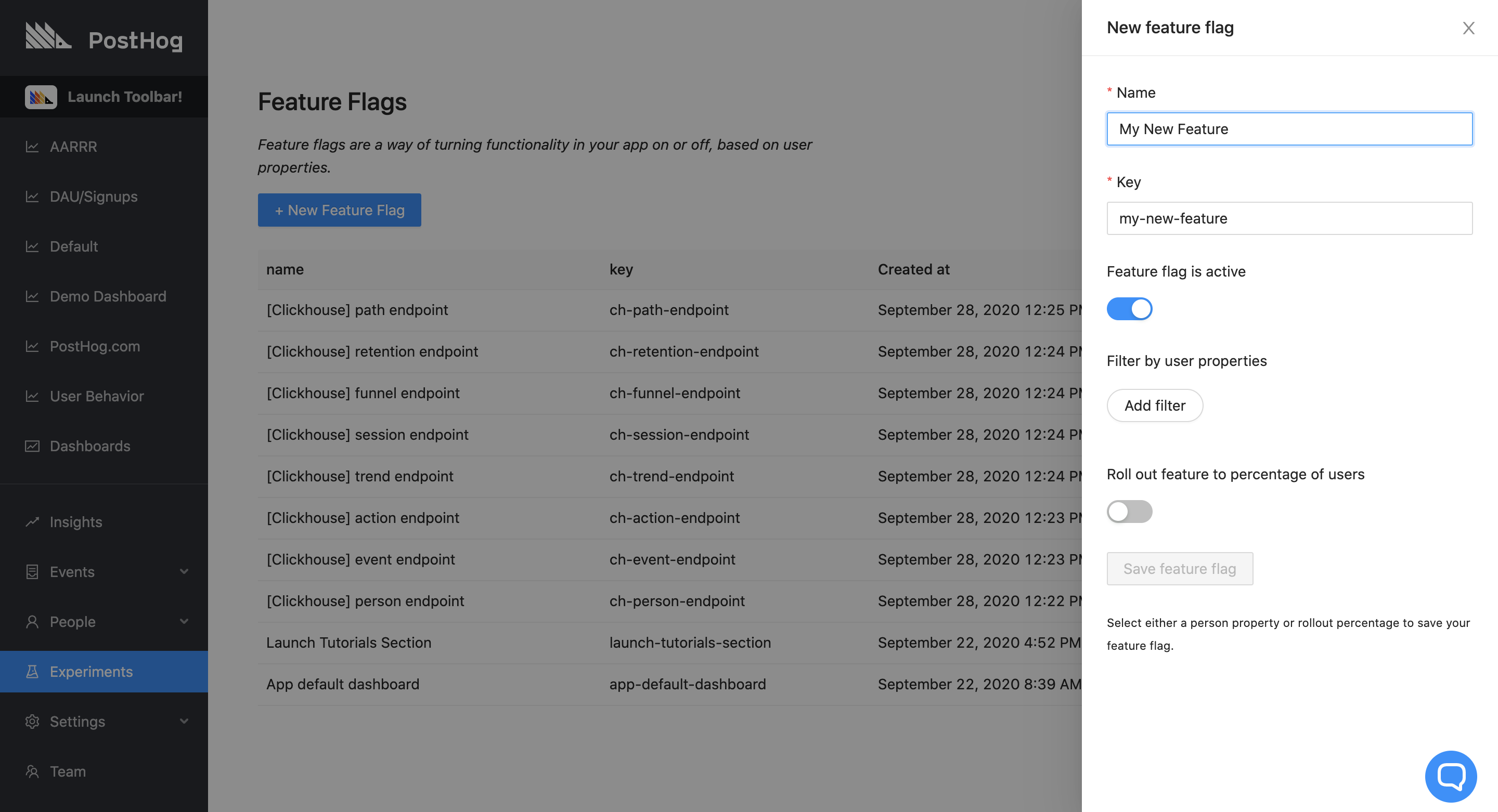 When you create a feature flag, we'll show you an example snippet. It'll look something like this:

What you do inside that if statement is up to you. You might change the CSS of a button, hide an entire section, or move things around.

Behind the scenes, every time a user loads a page we call an endpoint to get the feature flags that apply to that user. We store those flags as a cookie. This means that for most page views the feature flags will be available immediately, except the very first time a user visits your site.

Note: To avoid posthog has no attribute isFeatureEnabled errors, make sure you're using the latest snippet. You can find that in the 'Project Settings' page in PostHog.

This will persist until you call override again with the argument false:

To see the feature flags that are currently active for you, you can call:

Roll out the feature flag

There are three options for deciding who sees your new feature. You can roll out the feature to:

By rolling out to a percentage of users you can slowly ramp up who sees a new feature. The way this works is we "hash" a combination of the key of the feature flag and the unique distinct ID of the user.

This way a user will always fall on the same place between 0 and 100%, so they will consistently see or not see the feature controlled by the flag. As you move the slider towards 100%, more users will start seeing your feature.

The hashing means that the same user will fall along different points of the line for each new feature. For example, Alice will start seeing the feature at 5% for feature A, but only at 80% for feature B.

This works just like any other filter in PostHog. You can select any property and users that match those filters will see your new feature.

By combining user properties and percentage of users you can determine something like:

If the feature has caused a problem (like a huge server load), or you don't need the feature flag anymore, you can disable it instantly and completely. Doing so ensures no users will have the flag enabled.

For feature flags that filter by user properties only, a given flag will always be on if a certain user meets all the specified property filters.

As a result, keep in mind that changing those values will result in flags being toggled on and off for certain users in a non-predictable way.

Multivariate feature flags are only available when using PostHog >= 1.28 (if self-hosting) and posthog-js >= 1.13.

PostHog 1.28 introduces support for multivariate feature flags which can return string values according to a specified distribution. (Some examples for a 3-variant case would be 33/33/34%, 50/25/25%, 70/20/10%, and so on.) This is ideal for when you want to test multiple variants of the same interchangeable content, such as marketing taglines, colors, or page layouts. Currently, this is a beta feature for paying customers. Contact us through one of our support options to try this out!

Create a multivariate feature flag just like you would a standard flag, and then change the "Served value" option to "a string value". You will then be prompted to enter a few keys with optional descriptions and set the distribution percentages for each.

Note that the rollout percentage of feature flag variants must add up to 100%. If you wish to exclude some users from your test, i.e. have some users receive no value at all, configure the release condition groups. While the release condition groups determine how many users will be bucketed into any of the given variants, the rollout percentage of each variant determines the portion of the overall release group that will be assigned to that particular variant.

With the latest version of our JS library, you can call:

Just as you can call getFlags() to return an array of feature flags that are currently active, you can call:

onFeatureFlags(callback) now passes the feature flag variants object as the second argument to callback, which looks like this:

Note that getFlags() and the callback argument flags will include the key names of all truthy feature flags, including active multivariate feature flags.

With the latest version of our JS library, we send each feature flag's value as a separate property on every event. This means the values can be used in filters and breakdowns in Insights queries or wherever else you may choose to filter incoming events.

We send the event properties as $feature/your-feature-name, for example $feature/checkout-button-color. Standard (Boolean) flags are captured in this format as well.

For example, if you have a Trends graph of button click events and you'd like to narrow it down to clicks only when the checkout button is blue, apply a filter to your graph series such that $feature/checkout-button-color = blue.

If you'd like to compare all variants for which we have data in one graph, apply a breakdown by $feature/checkout-button-color.