In this world nothing is certain except death, taxes, and database migrations.

As your product evolves, your schemas evolve too, and you need migrations to update them.

However, not all migrations are made equal.

Some are simple, others are complex. Some run quickly, others take a long time.

For example, consider the following three scenarios that we've encountered at PostHog when updating table schemas in ClickHouse (our analytics database):

Note: These scenarios are based on non-replicated tables.

1. Adding a column to a table

This is reasonably simple. We can modify the table in place with an ALTER TABLE statement and add the column we want.

2. Changing the engine of a table

Here things start to get a bit more complicated. ClickHouse does not support changing table engines via ALTER TABLE, so we cannot modify the table in place.

Instead, we need to create a new table with the same schema, except for the engine change, and insert data from the old table into it.

Luckily, ClickHouse provides a nice way to do this. With ATTACH PARTITION, we can "copy the data" from the old table to the new table reasonably quickly, by simply "attaching" the existing partition(s) to the new table. In reality, no data gets "copied", but rather new hard links are created to point to the existing data.

So while we do need to get data from a table to another, this isn't very problematic.

3. Changing the sorting key of a table

This is where things get hairy.

This is defined by the ORDER BY clause at table creation.

Now, say you've done some analysis on the most common queries you run and determined you'd have a massive performance benefit from adding a column to your sorting key.

While a MODIFY ORDER BY statement does exist on ClickHouse, the docs specifically note that "you cannot add expressions containing existing columns to the sorting key".

The reason for this is that adding a column to the sorting key would require rewriting all parts on disk, as they should now be sorted differently.

This means that, like in example #2, we need to create a new table and add the old data to it. However, it also means that we cannot use ATTACH PARTITION, as the parts on the new table will be different from those on the old table.

That leaves us with one option: inserting all the data from the old table into the new table...

Needing to execute migrations like the one above leaves us with a difficult problem at hand: inserting data row by row can take a long time.

The time it will take depends on the size of the table to be migrated, and thus, if we're migrating a large table (say, our events table), this can take weeks.

As a result, we can't pop this in with our other ("normal") migrations which run on every upgrade, as they would prevent the upgrade from happening, and potentially even cause downtime.

But that's not all. We at PostHog have an additional problem: self-hosted users.

If PostHog was a SaaS-only platform (with no self-hosting available), we could have a team dedicated to running this "manually" on our instance, monitoring it, and making sure everything runs smoothly.

However, that's not a viable option for users that run their own PostHog instance. Providing them with a runbook is an option, but it doesn't align with our goal of making PostHog easy to deploy and manage.

We needed something better. 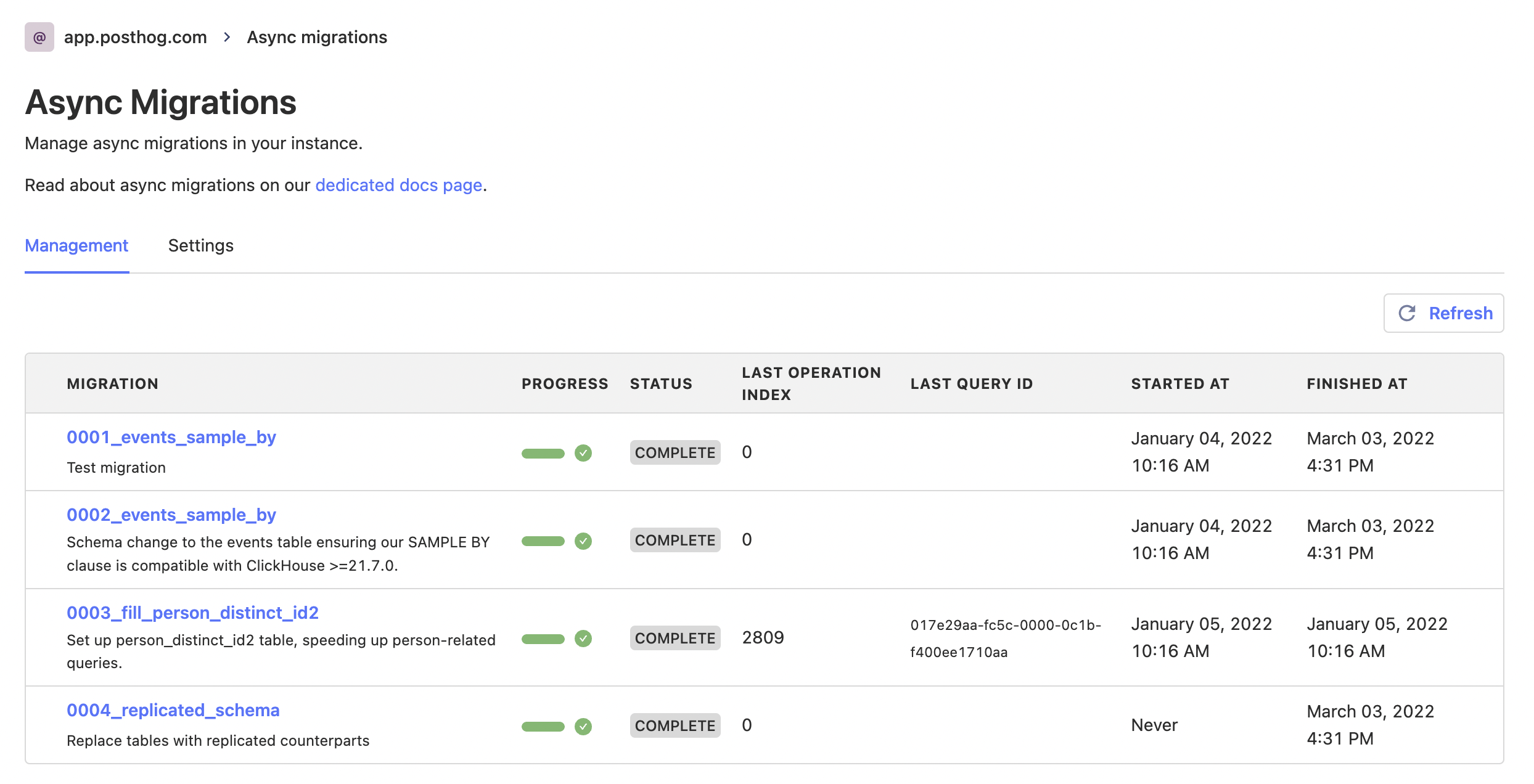 The solution we came up with for the problem mentioned above is a system for running so-called async migrations.

This system allows us to safely run long data migrations in the background without causing any downtime, as well as provides a full suite of tools for managing and debugging these migrations easily.

When we started building it, we wanted the system to have three key characteristics:

Here's how we achieved all three.

1. It should be asynchronous, but with guarantees

As we established earlier, long-running (and potentially unbounded) migrations can't be part of the upgrade path.

For this, we settled on a version range approach.

Unlike migrations that immediately become a pre-requisite for upgrading to the version they're included in, async migrations specify a range of versions within which they can be run, and users can run them at any time they like, provided their instance is within the range.

The beauty of this system is that users have flexibility to pick a convenient period to run the migrations (maybe they want to keep a close eye on it, or scale some services temporarily), but we (PostHog developers) can rely on them being completed from a given version onwards.

The guarantees around completion are done via a combination of hard requirements for upgrading to certain versions and good communication through release notes and docs, and they prevent us from having to support multiple code paths depending on the state of the database.

Given our monthly release schedule for minor versions, a migration added in 1.45.0 with an upper bound of 1.48.0 gives users three months to run them before the version it is required in comes out. In addition, it allows us to start working on code that relies on the migration being done after two months, essentially as soon as the last supported version (in this case 1.47.0) is released.

As for how they run, we leveraged a service we already used for asynchronous operations: Celery. We only ever run one async migration task at a time, keep task states temporarily in Redis, and tasks are dispatched with track_started=True and ignore_result=False, so we can keep an eye on them and handle edge cases like the Celery worker dying unexpectedly.

2. It should be safe

Anytime you're messing with user databases there's a risk that things will go bad. Period.

As such, just like with any migration, async migrations still rely on reviewers, tests, and checks to ensure nothing dangerous is shipped, like a migration with DROP TABLE events.

However, it was a top priority for us to make the async migrations system include all the necessary tools for running database operations safely on environments we don't control (self-hosted instances).

To achieve this, we:

3. It should be easy to work with, both for developers and users

Lastly, async migrations should be easy to launch and manage for users, as well as easy to write and build upon for developers.

To cover the latter part, we implemented the aforementioned guarantees and checks, as well as made the migration definitions closely resemble other migration systems we already have in place.

As for users, we built a fully-fledged UI for instance admins, where they can read about the migration, update settings (like default timeouts and automatic rollbacks), trigger a run, pause or resume a migration, force a rollback, monitor status and progress, as well as get a list of errors.

We also store the ID of the query that is currently running on the database and the ID of the Celery task handling the migration, so more advanced users can go into the services themselves for additional monitoring.

Ultimately, running a migration takes only the click of a button, but all the tools are in place for debugging issues if they come about.

It's also worth noting that we implemented an API for migrations to check if they should even run at all on a given instance. This is particularly useful for preventing useless runs on fresh deploys. A user that deployed PostHog after the migration was introduced shouldn't need to run a migration to get from an old schema to the new schema, given they already have the new schema in place (async migrations should come with corresponding changes to the original schema definitions). In these cases, we auto complete the migration and unblock upgrades without any user input at all.

Async migrations are triggered from the UI and create a Celery task that handles its execution in a background worker.

Metadata about the migration is stored in Postgres, including things such as status (completed, errored, rolled back, etc), progress, start and finish times, and other useful information. 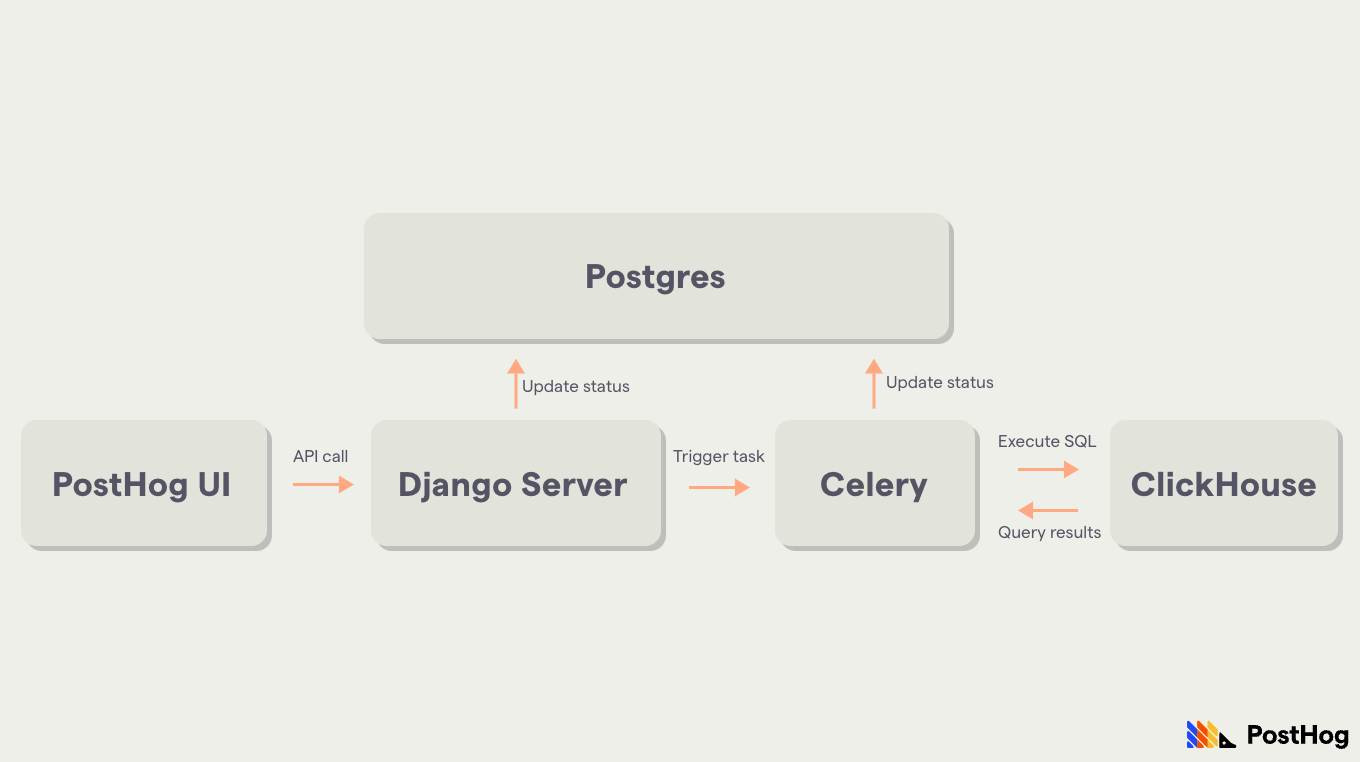 An async migration can contain the following components:

We currently have three async migrations in the codebase, each destined to make queries in PostHog significantly faster. If you're a user, make sure to run them! For more info, see our dedicated docs.

Oh, and while we don't spin this out into its own tool for others to use, feel free to check out our codebase if you have a similar problem - don't worry, it's open source 😉.

PostHog is an open source analytics platform you can host yourself. We help you build better products faster, without user data ever leaving your infrastructure.