With our last release being over a month ago, this new release has the largest changelog to date, with 175 PRs merged to master since the last time you heard from us.

However, there is method to the madness: PostHog is now super scalable.

We've been working hard on making PostHog faster and more efficient, and we're happy to announce that our Enterprise Edition is now able to handle massive volumes without breaking a sweat.

So let's get into it: what does super scalable mean and what else did we do since the last release? 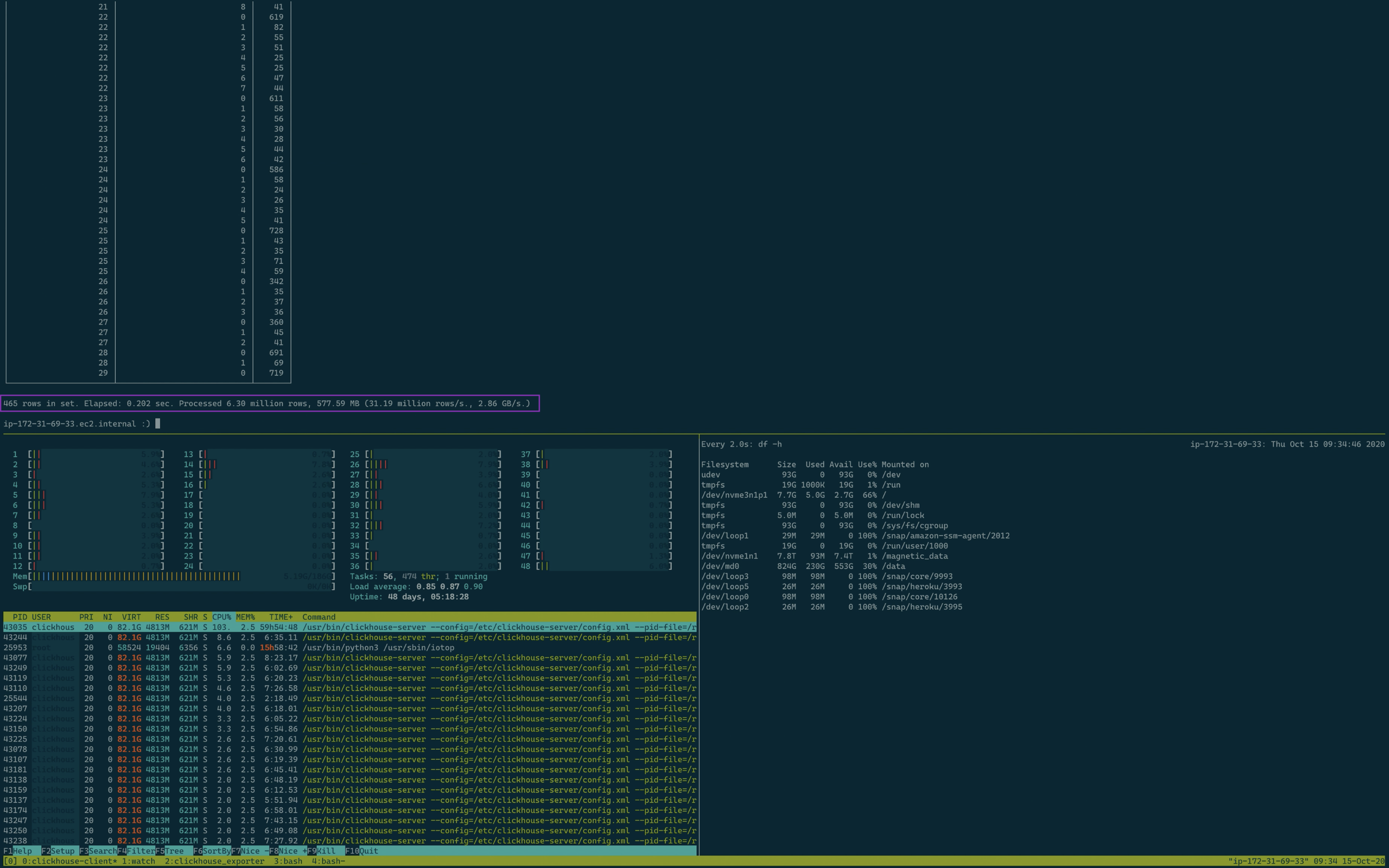 If you've followed our progress on GitHub over the past months, you'll know that ClickHouse has been the talk of the town.

In their own words, ClickHouse is "a column-oriented database management system (DBMS) for online analytical processing of queries (OLAP)".

Or, in simple terms: it's a very fast database.

As you may know, we have been using the well-established and reliable PostgreSQL until now, but from here on out our Enterprise Edition will be using ClickHouse instead. PostgreSQL remains a great option for lower volumes, but, for companies that handle huge event volumes, ClickHouse is a much better choice.

On our cloud version we handle event numbers in the nine figures, and implementing ClickHouse has drastically reduced the execution time for all of our queries.

If you're interested in using PostHog with ClickHouse, send us an email at contact us to find out more. 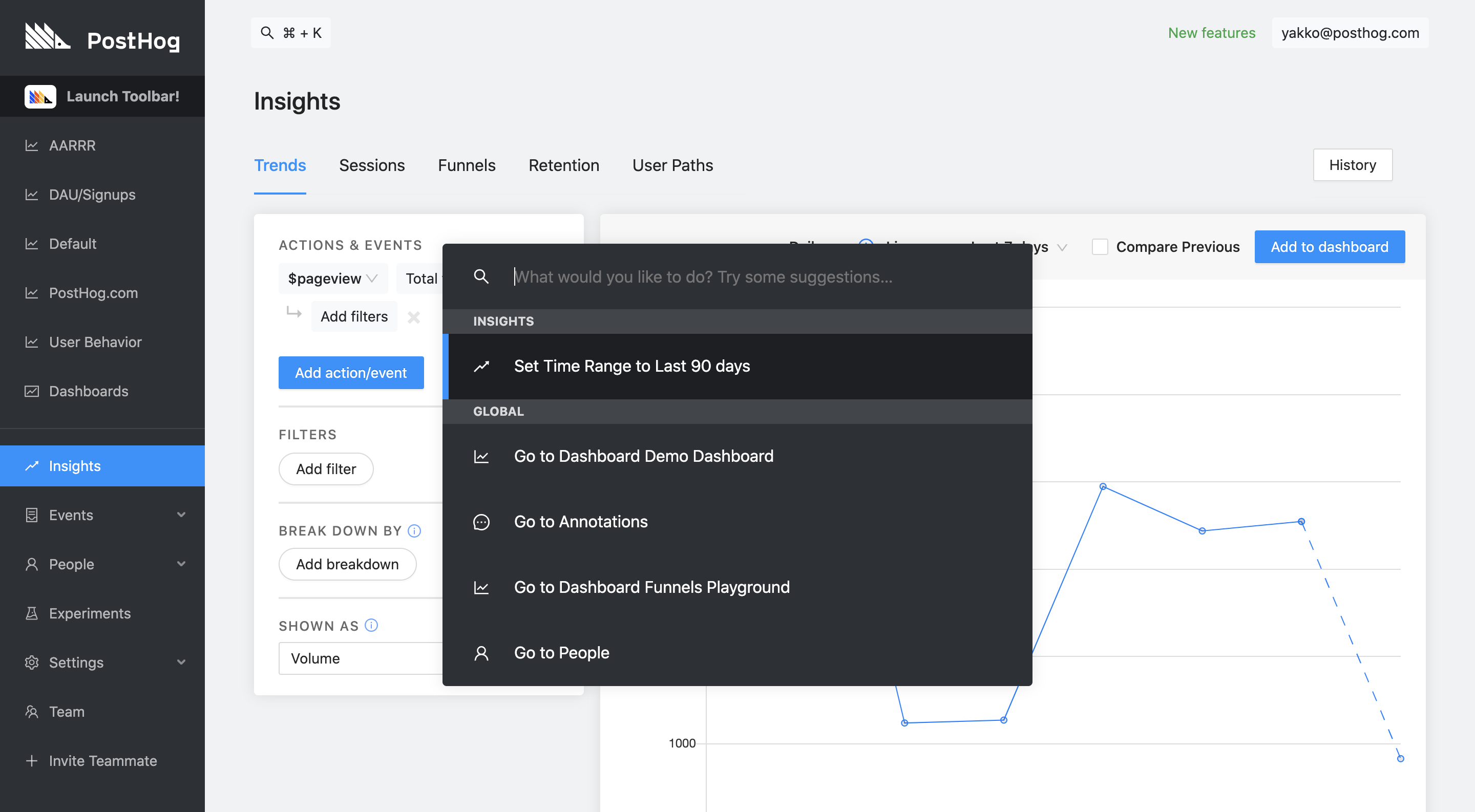 We're super excited about this.

Last week we did an internal hackathon and the command palette was one of the awesome projects to come out of it.

Now, when using PostHog, you can press ⌘K (Mac) or Ctrl + K (Windows) to reveal a Spotlight or Superhuman-like command palette that lets you navigate around PostHog mouse-less. In addition to navigation, the command palette also has page-specific commands that let you, for example, change the time range on charts, as well as a way to quickly share feedback with the PostHog team, create an API key, or even do some math with the built-in calculator.

Eric, Michael, and Paolo got this done in just a few days, and we love it.

Stay tuned for more exciting features that were built during the hackathon. 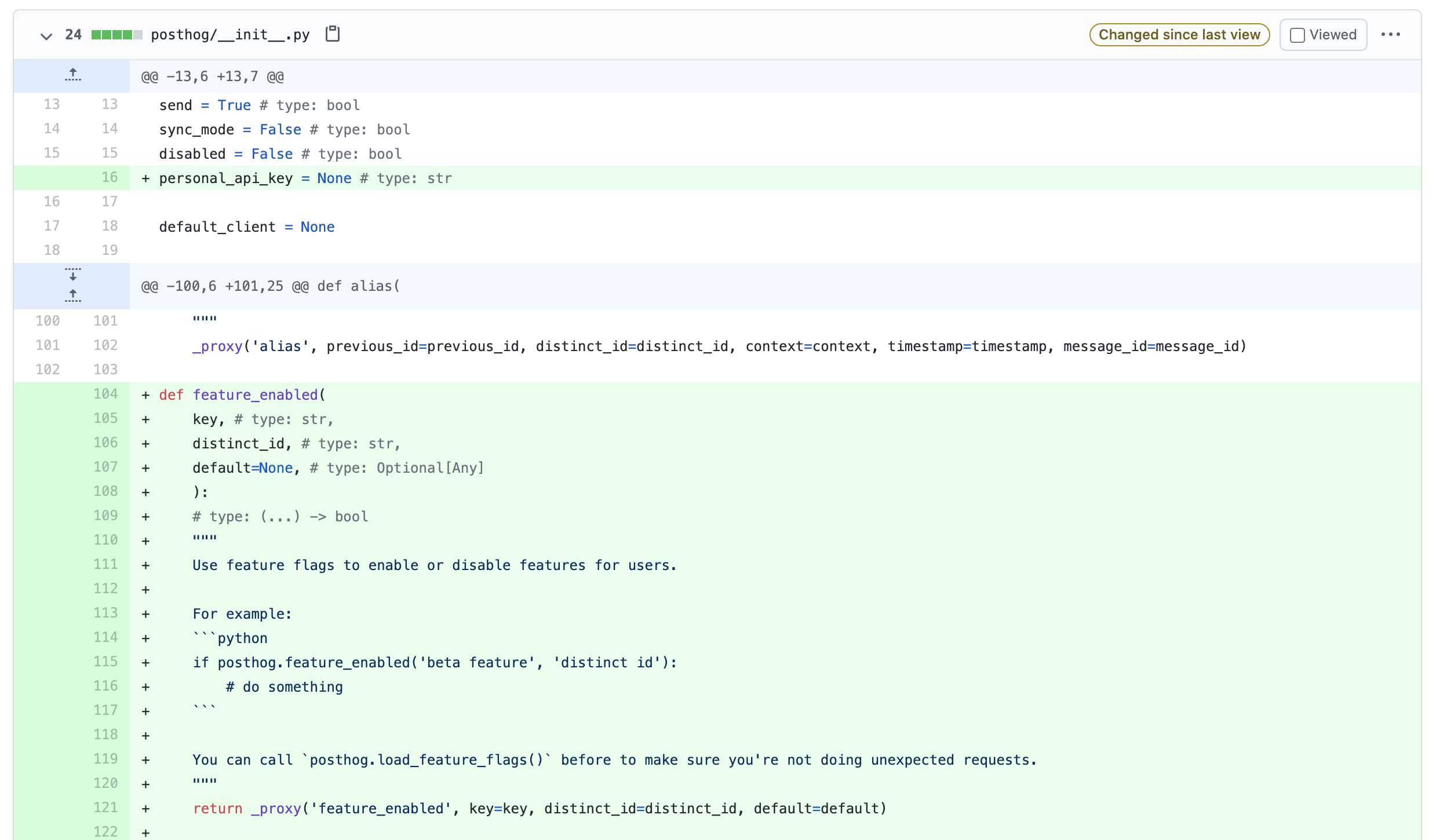 Based on community feedback, we made it easier for feature flags to be integrated with your backend, in addition to our frontend JavaScript implementation.

We've added feature flag support to our Python Library, as well as improved the /decide endpoint used by feature flags to make the API experience better.

We have ourselves been using feature flags with the Python Library to slowly roll out some exciting new features. 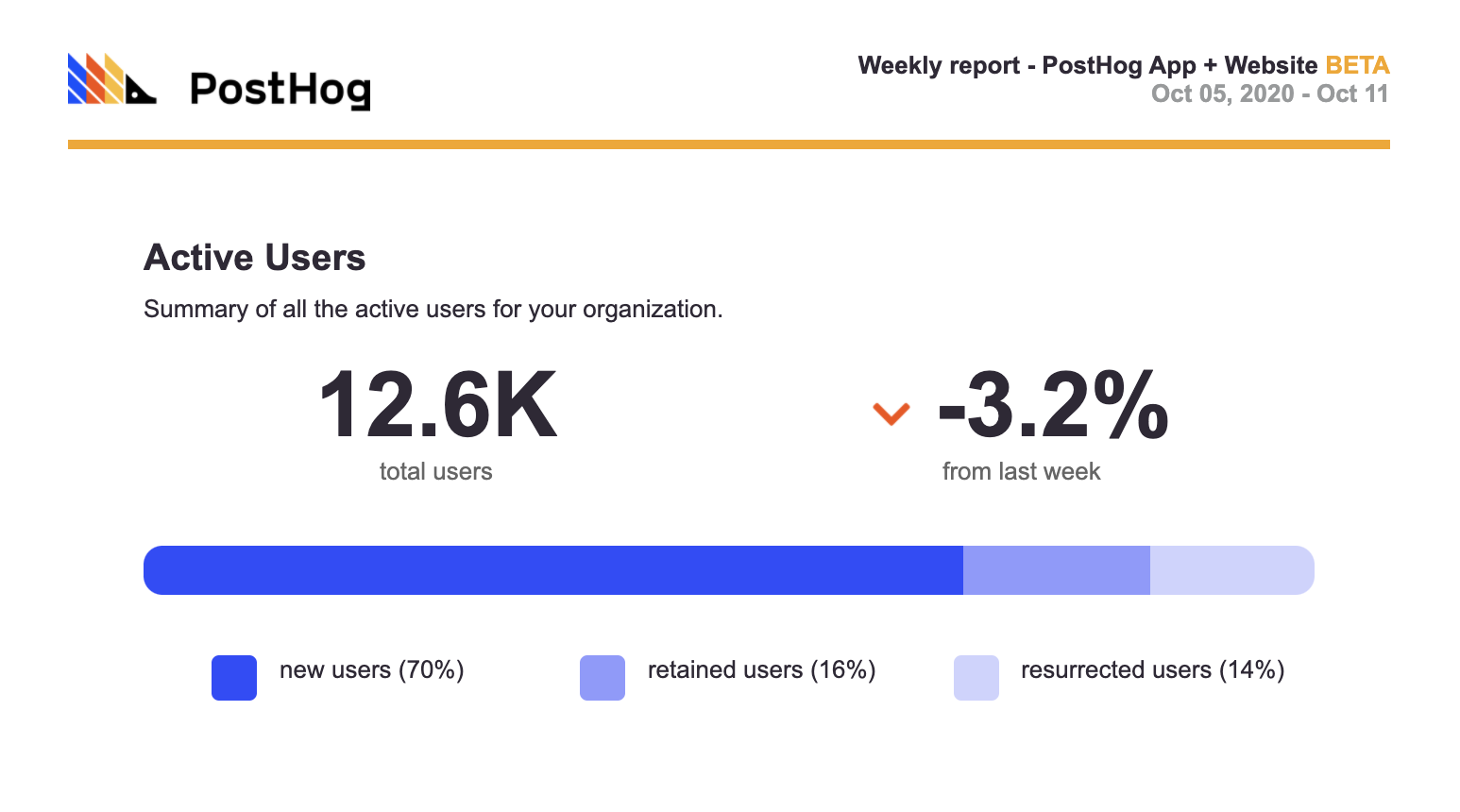 To help users keep up with their key metrics in a simple way, we have introduced a weekly email that gives you an overview of your active and churned users over the previous week.

This is in Beta mode and we're expanding its capabilities, but it already gives you a good sense of your performance in terms of users.

Have you gotten your weekly report yet? 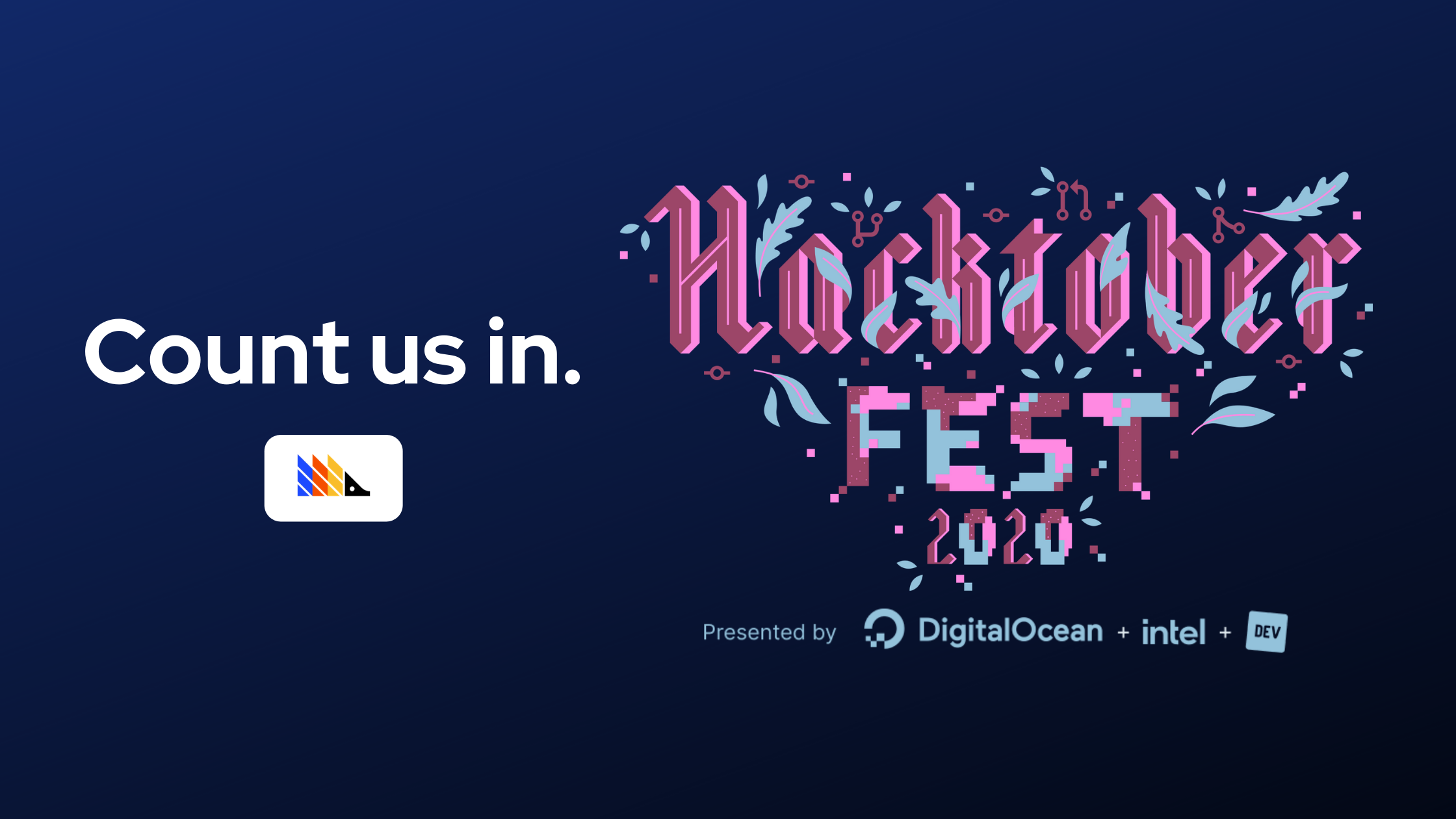 We're happy to announce that PostHog has joined Hacktoberfest 2020.

For those who don't know, Hacktoberfest is an initiative led by DigitalOcean to promote open source projects and foster the overall open source community.

As a result, we have now tagged some good first issues on our main repo with the Hacktoberfest tag, as these should be suitable issues for first-time contributors. We have also made an effort to document those issues better, so that their scope is clearly defined.

By submitting a pull request that gets merged for one of these issues (or any other issues on our main repo), we will send you some PostHog merch and you'll be able to count that contribution towards the 4 PRs you need to get the Hacktoberfest shirt.

We’re working hard to improve PostHog and would love to talk to you about your experience with the product.

If you're interested in helping us out, you can schedule a quick 30-min call with us on Calendly.

Oh, and we're giving away some awesome PostHog merch as a thank you!

In addition to the main features mentioned above, we also merged over 100 PRs improving PostHog's performance and fixing bugs:

Our team has been actively engaged in discussions about company strategy, culture, and values over the past few weeks.

And, since we value transparency, most of that is openly available for anyone to read, such as our public strategy.

He believes pineapple belongs on pizza, which has further increased the divide within our team.

Are you a Fullstack Engineer or Frontend Developer?

Or perhaps you're not either but think you'd still be a good fit for PostHog?

Bonus: ClickHouse in a Nutshell

If you're still a little confused about ClickHouse, this might help:

The best of PostHog.
Delivered twice a month.