Using Google Analytics was deemed 'illegal' in some EU countries. We built a microsite in 48 hours to capitalize on the news.

On January 14, 2022, the world learned that Austria had declared Google Analytics to be illegal (in its default form), since it transmits IP addresses to the United States. The Netherlands declared the same view only days later.

Given that PostHog is an open source, self-hostable analytics tool that eliminates the need to transmit data to any third party, this was obviously a perfect opportunity for us to capitalize on the news.

Within five days, we launched IsGoogleAnalyticsIllegal.com and shared it with the Hacker News community. Here’s the story of how we built it in two days, how it was received by the HN community, and our missteps along the way.

It all started when our CTO shared the news on Slack 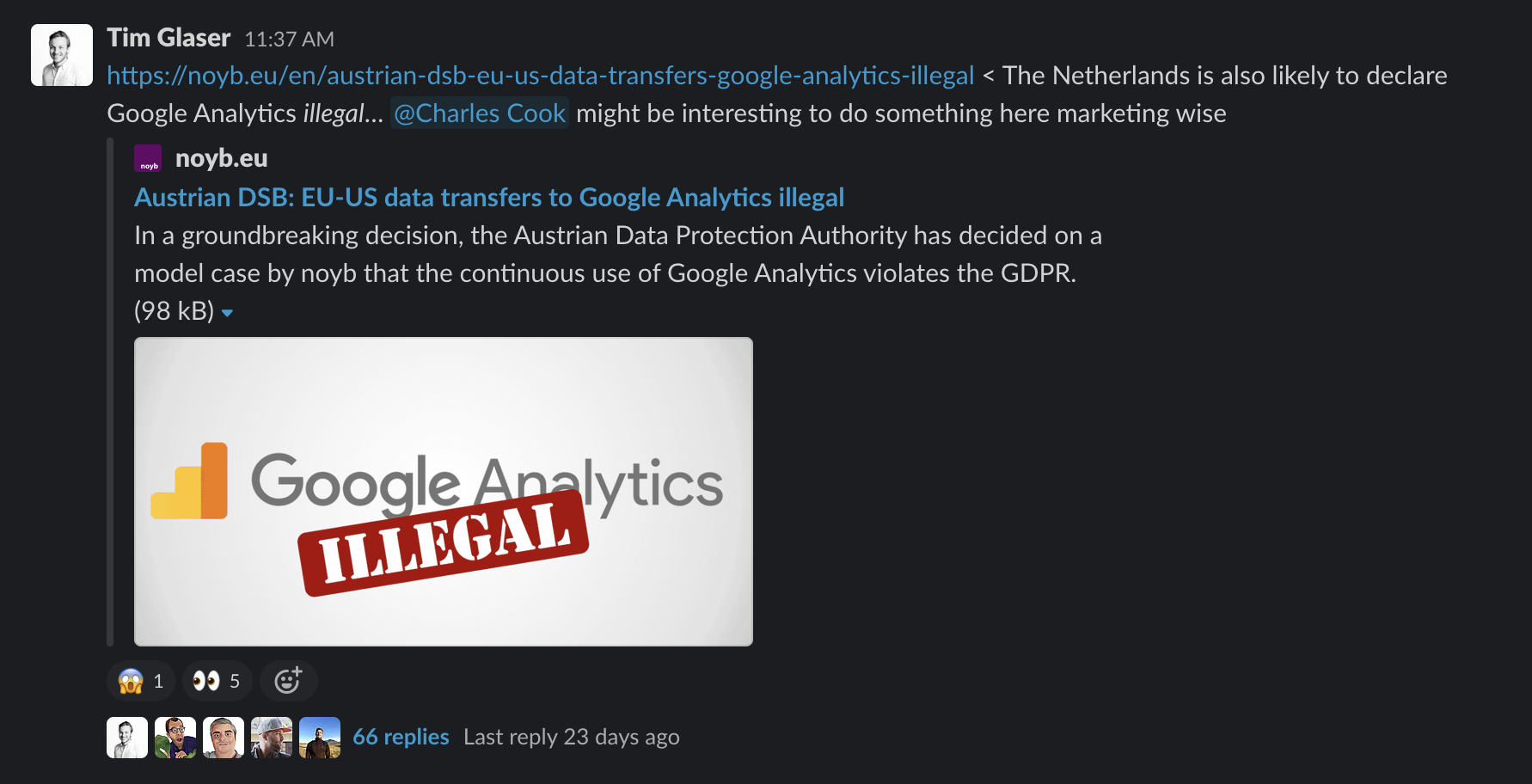 Obviously this felt like a fun idea, so I put together a quick joke of a wireframe 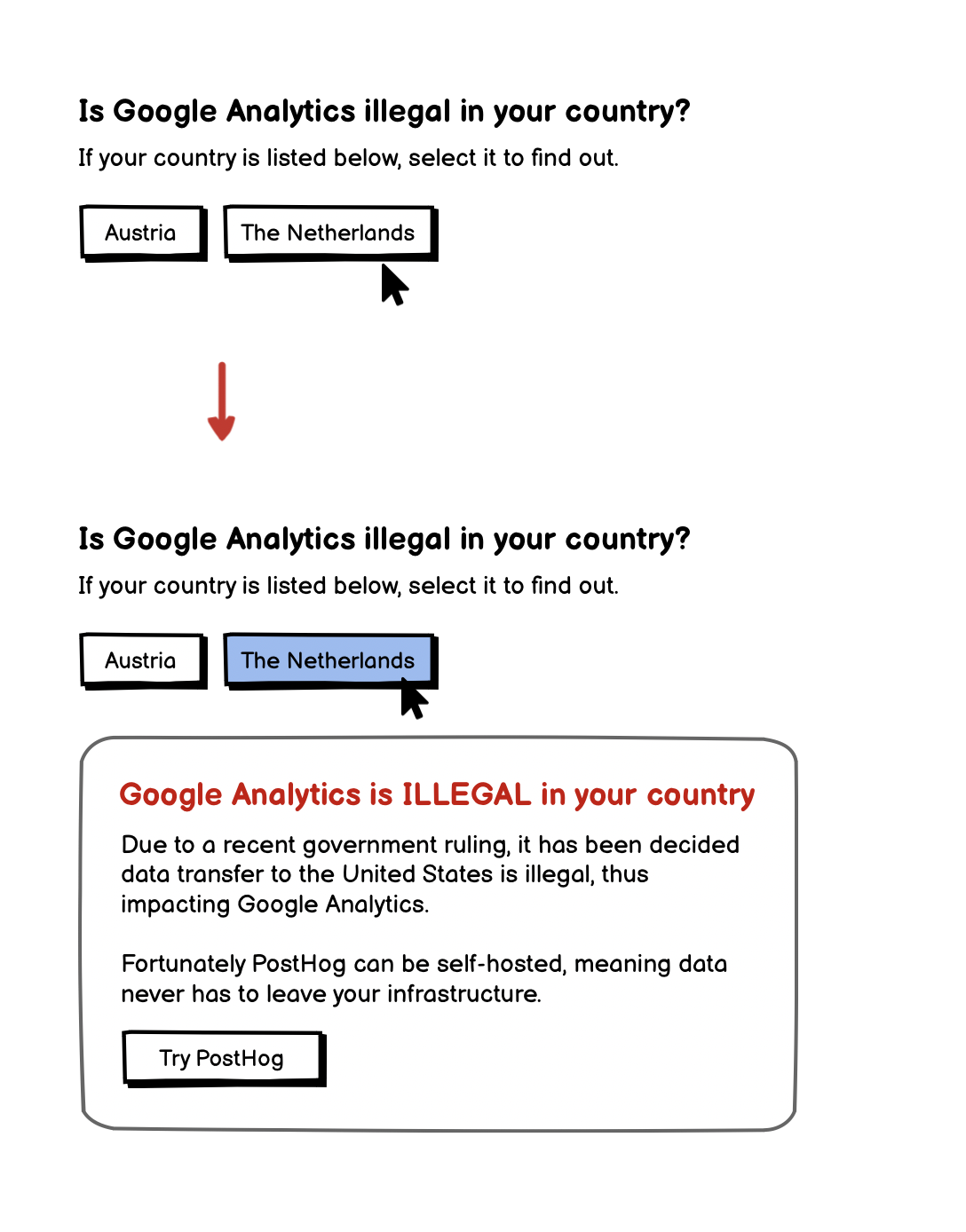 I remember being on a flight at the time. What better way to spend a couple hours in coach than to whip up a mock? 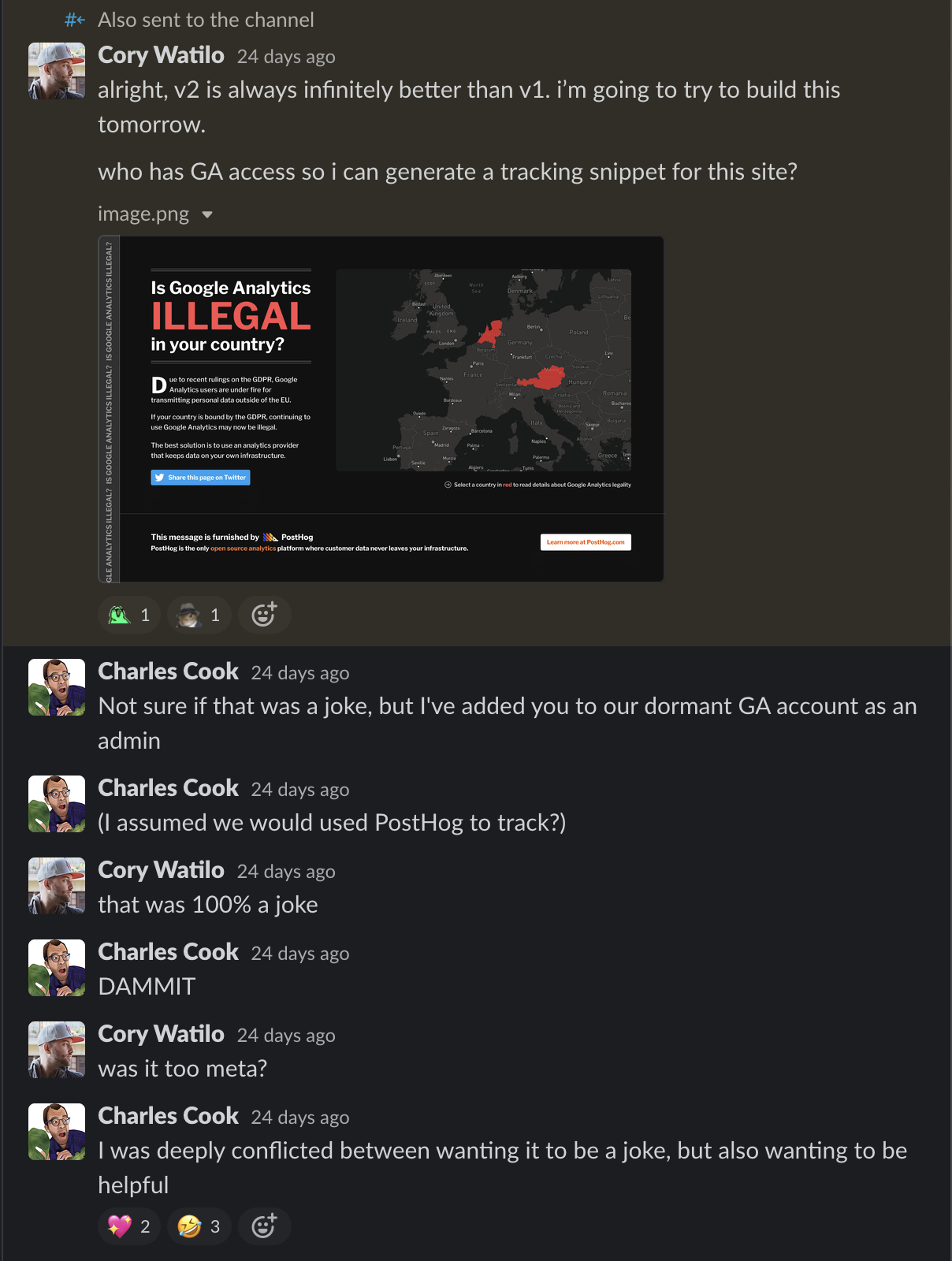 How we positioned the site

We decided to share the site on Hacker News, a site that highly values authenticity. If a post has even the slightest whiff of self-promotion, you can be prepared to be torn to shreds.

Thankfully one of our marketing values is “No sneaky shit.” I can’t say it better than it’s already stated in our Company Handbook:

Our focus customers are technical and acutely aware of the tedious clickbaity marketing tactics that software companies use to try and entice them. Stop. It's patronizing to both the customer and the marketing people creating the content.

We will never try to trick someone into using PostHog through spammy marketing tactics. That's a great way to boost vanity signup metrics in the short term before the customer quickly churns out.

1. Provide value: Include our competitors and let anyone add to the list

We seeded our Google Analytics alternatives page with all of the competitors we could think of who would solve this problem for companies affected by this ruling:

We also published our codebase on GitHub, where anyone can submit a pull request to add another competitor to the list.

2. Don’t take it too seriously

When you hover over the map of countries where Google Analytics has been deemed illegal, you’ll see a photo of Ursula von der Leyen, the President of the European Commission, indicating her enthusiasm about the rulings.

We tried to find the balance between providing real value without trying to look like we’re scaring people into needing to use PostHog. 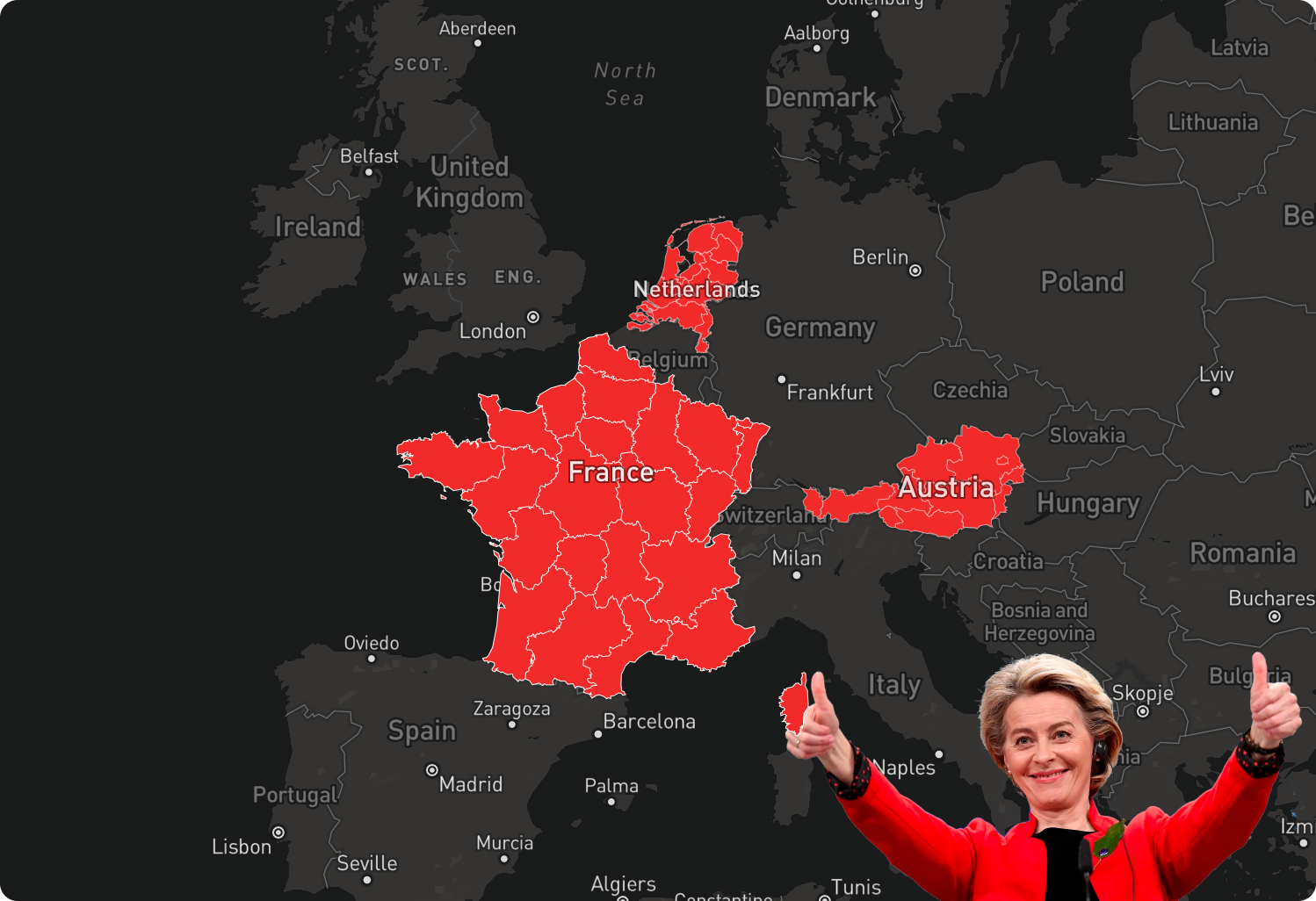 3. Make it abundantly clear who’s behind this

Like a cigarette pack that has to include a giant health warning, we tried to go over the top to disclose who was behind the site. (You can’t demonize a little self-promotion, right?)

Our Hacker News post jumped to the #2 spot on launch day, driving over 100,000 pageviews to the site. As with most posts, responses were mixed, though we did make some pretty silly gaffes (which we tried to rectify quickly).

In our haste to get the site live, we used a hosted Google font. This was quickly pointed out by a commenter (and rightfully so). We fixed it, but unfortunately that became the most popular comment, and is the top comment to this day.

Don’t use page URLs that get blocked by privacy tools

As it turns out, uBlock is allergic to the following slug:

Since that page was inaccessible to uBlock users, we had to change the path to /alternatives.

We see a differentiation between:

Some people liked the design, others didn’t (typical Hacker News!)

As the designer on this microsite, I’d like to extend a shout out to melissalobos for the design love. (As a designer with perpetual imposter syndrome, it’s always nice to hear!)

It was quickly followed up by the contrarian opinion, followed by a discussion about said opinions. (Would it really be a Hacker News thread if it didn’t go down this rabbit hole?) 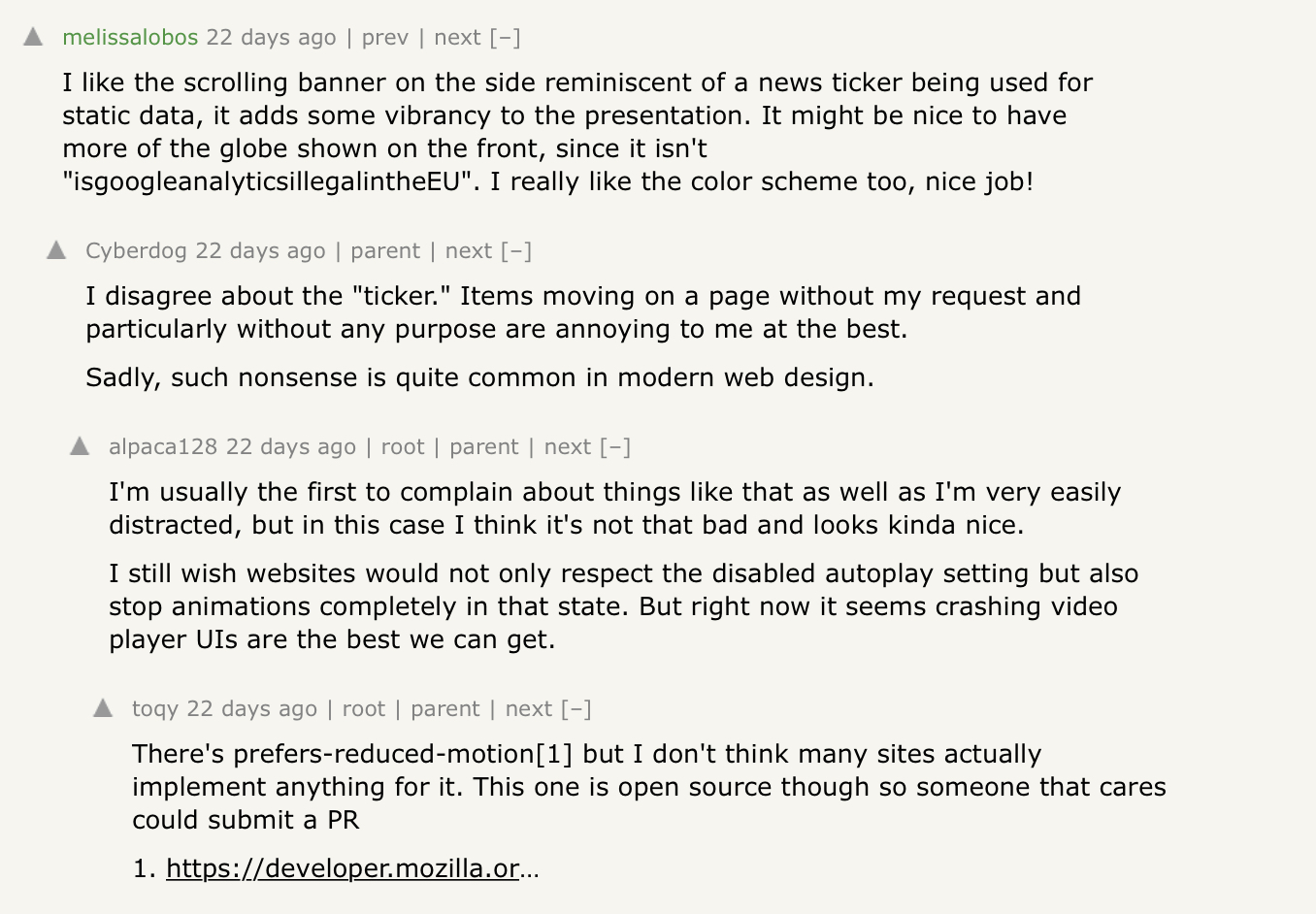 Consider how people will interpret what you’re not actually saying

Countries required to follow GDPR can still use Google Analytics if they don’t transmit personal data like IP address.

Unfortunately, not everyone understood this distinction. 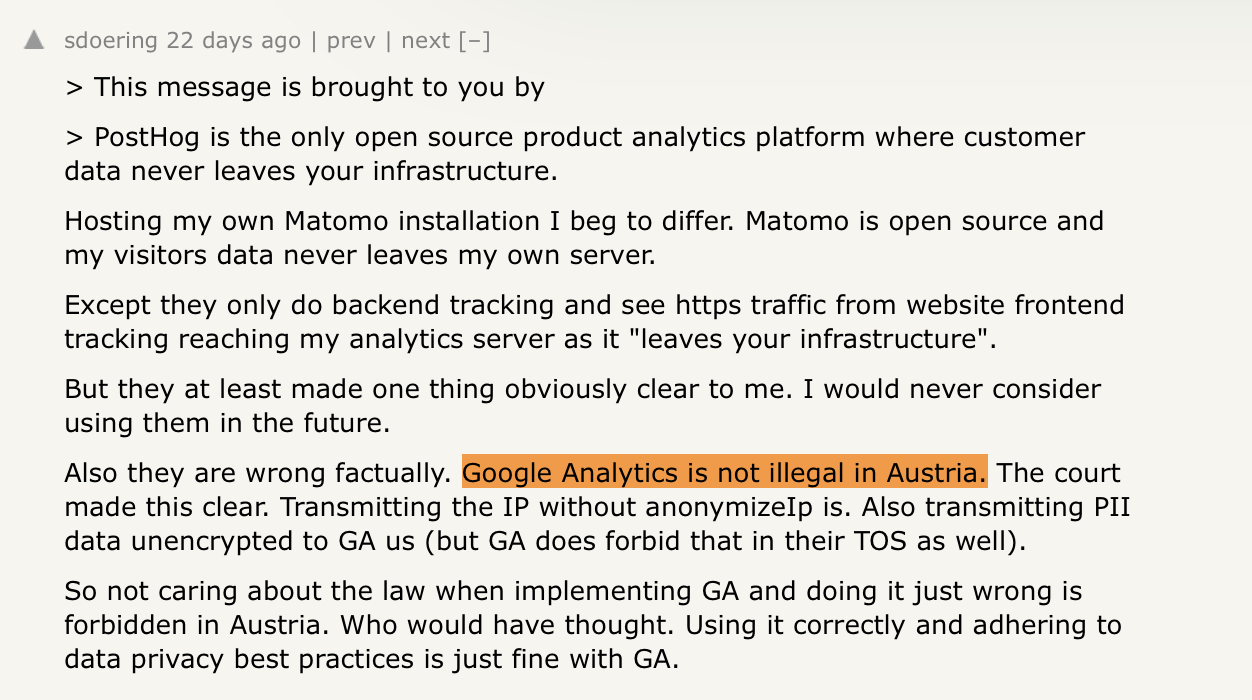 Given the fact that one of our values is to not use sneaky marketing tactics, I won't deny we pushed the boundaries here.

There's a risk that pitching the tagline the way we did could result in a negative perception with a certain userbase. Ultimately we decided to run with it, and we’ve been pleased with the outcome.

Ultimately our goal was brand awareness. In the 30 days following the site's launch, it resulted in 52,197 unique visitors to IsGoogleAnalyticsIllegal.com, which sent 1,791 unique visitors through to posthog.com.

We continue to update the site as there are further developments across the EU.

More recently, France found Google Analytics to be illegal, so we recently added that to the site. In fact, we saw a huge spike in traffic to the site around this time.

If this continues to become more of a trend, we’ll have to switch from manually creating graphics for the site and switch to an actual hosted mapping solution.

But if we get to that point, we’ll be sure to check that there’s no third-party tracking involved.