Experimentation helps you test changes to your product. You can test hypotheses about which changes will lead to optimal results. You may have also heard it called A/B testing, or split testing. Examples:

🚧 Experimentation is currently in beta and support is limited to our JavaScript integration. If you have any feedback, please reach out.

How does it work?

With Experimentation, you start with a hypothesis on how to improve your product (e.g. changing the flow, changing copy, changing visual styles, etc.) and a goal (e.g. improve conversion, improve sign ups, etc.). Once you have those you can:

Based on your user selection and your goal, we will estimate the number of users exposed and the number of days required for your experiment to reach significant results.

We distribute all selected users equally between the control and test groups. So, for example, if there are 3 test variants and 1 control variant, each variant gets 25% of the total users selected.

You can tweak settings on the creation screen to speed up the experiment or adjust user exposure (e.g. you may not want certain users exposed to your experiment).

The actual experiment and what your user sees is controlled in your own code (see below on Creating an experiment). Your code asks PostHog which group does this user belong to and then accordingly show any relevant changes in your app or website. Because this is done in your code you can test any number of things, from changing copy in a button, to taking the user to a different page, or showing them a completely different experience.

To ensure your experiment does not introduce any regressions, you can also track secondary metrics. This is particularly useful if you're optimizing a metric that has a natural trade-off with another metric (e.g. you can maximize conversion by reducing your price but then your total revenue may be reduced).

Once your experiment is terminated, you can easily archive and share your results with other team members.

How do we handle statistical significance?

For your results and conclusions to be valid, any experiment must have a significant exposure. For instance, if you test a product change and only one user sees the change, you can't extrapolate from that single user that the change will be beneficial/detrimental for your entire user base. This is true for any experiment that is a simple randomized controlled experiment (e.g. this is also done when testing new drugs or vaccines).

Furthermore, even a large sample size (e.g. approx. 10,000 participants) can result in ambiguous results. If, for example, the difference in conversion rate between the variants is less than 1%, it's hard to say whether one variant is truly better than the other. To be significant, there must be enough difference between the conversion rates, given the exposure size.

While Feature Flags can be boolean or multivariate, Experimentation always uses a multivariate approach.

How to use Experimentation

Creating an experiment starts with a hypothesis you want to test. Let's use an example of whether a visual update to the sign up button will increase clicks for that button.

After clicking on "new experiment" in the Experiments page, we should see a form like this: 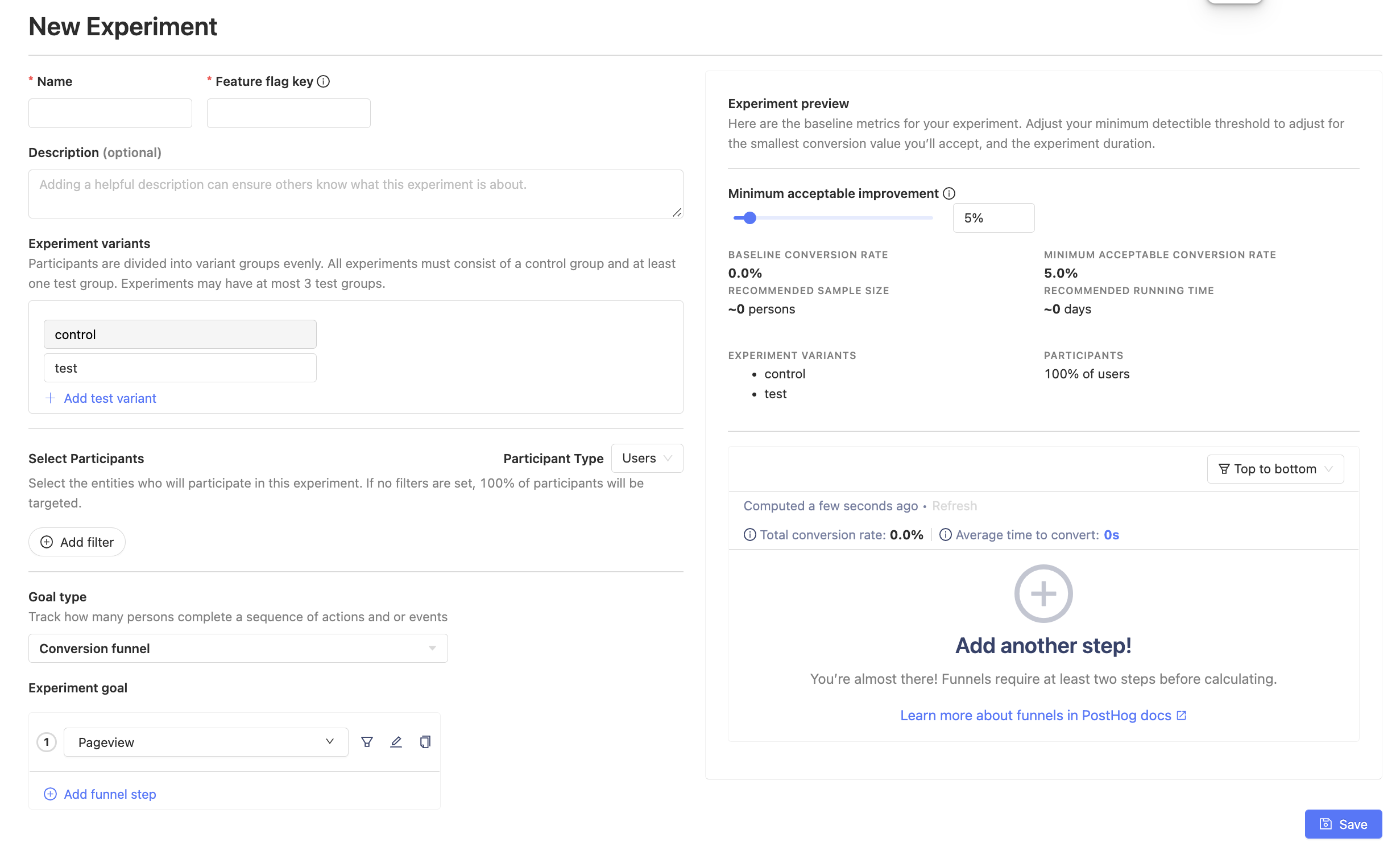 Let's start in the upper left corner by filling out a name, description, and feature flag for our experiment. Fill in a name for your feature flag - it will be created here by default, linked to the experiment rather than existing as its own entity. 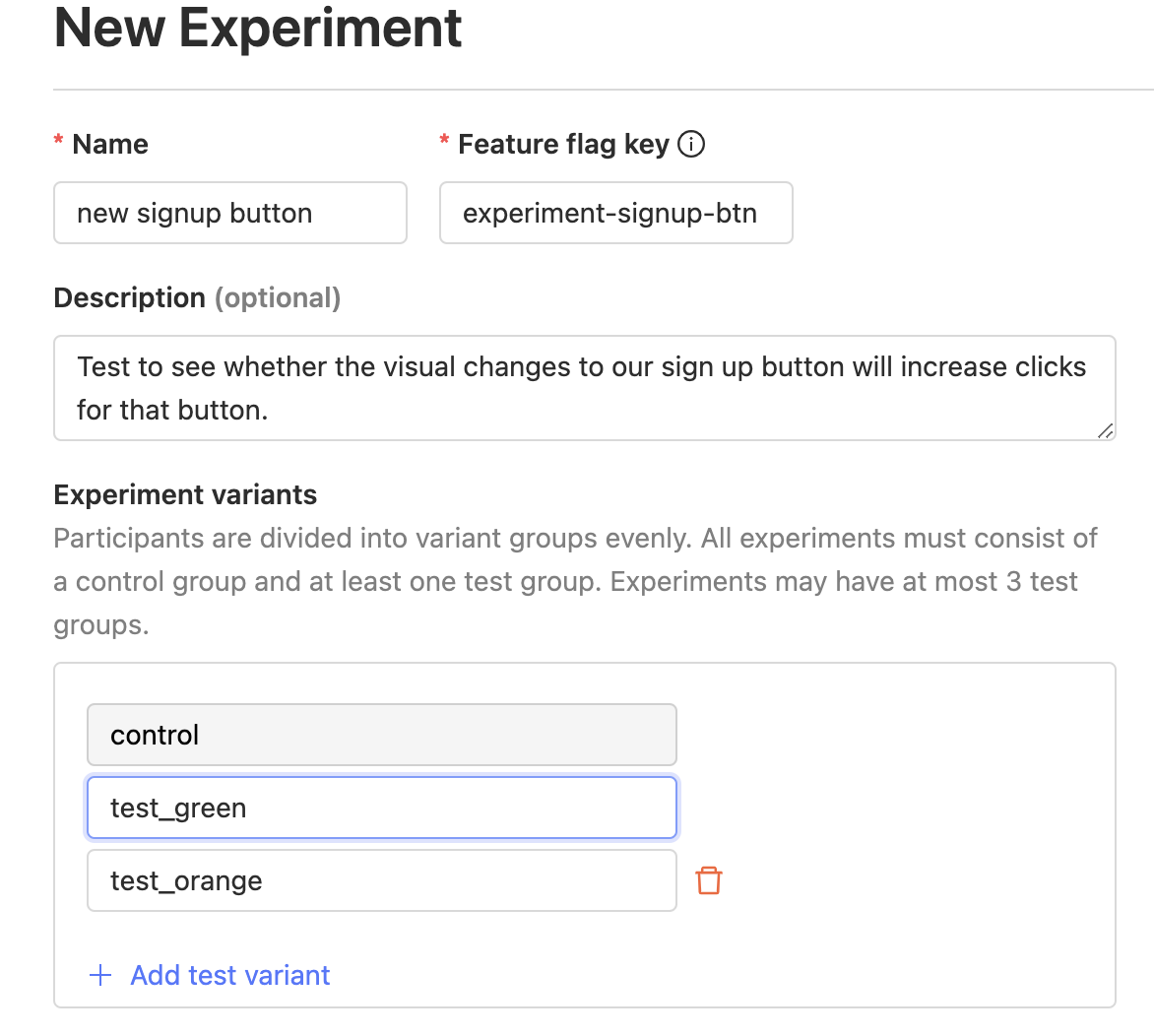 We can also include multivariants for our testing changes. For example, instead of running our experiment with just "control" and "test", we can test for the green visual button change or the orange one or our original control.

Next, we want to select our experiment's universe. Here, we've decided that for our sign up button experiment we want to test our hypothesis on users from Asia.

We also want to set our experiment's "goal" now for which metric we want to track. Since we're testing whether the number of sign up button clicks increase or not, we'll use the "Trend" goal to measure aggregate values 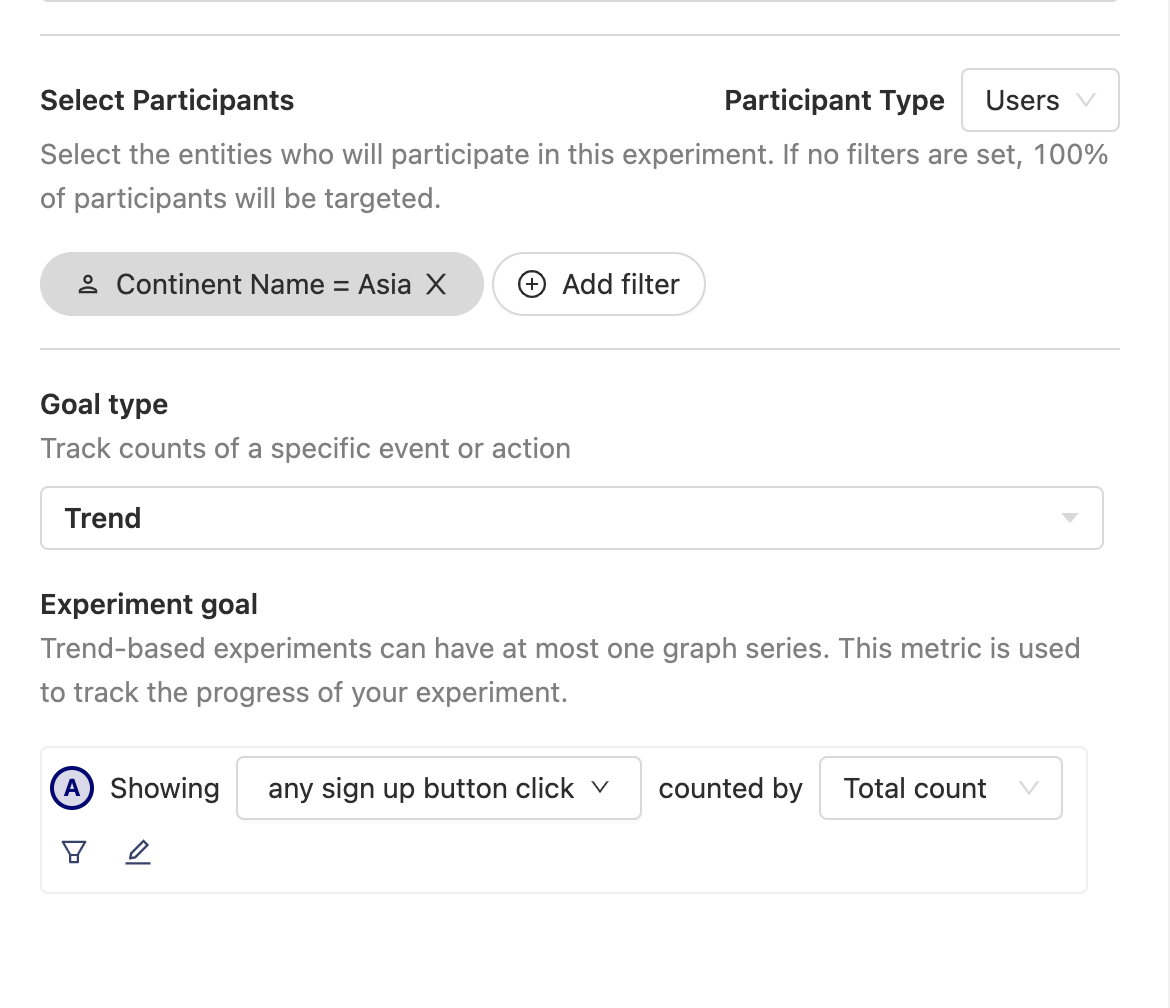 If we want to test a hypothesis for a conversion rate metric, we'll use the "Funnel" goal instead. 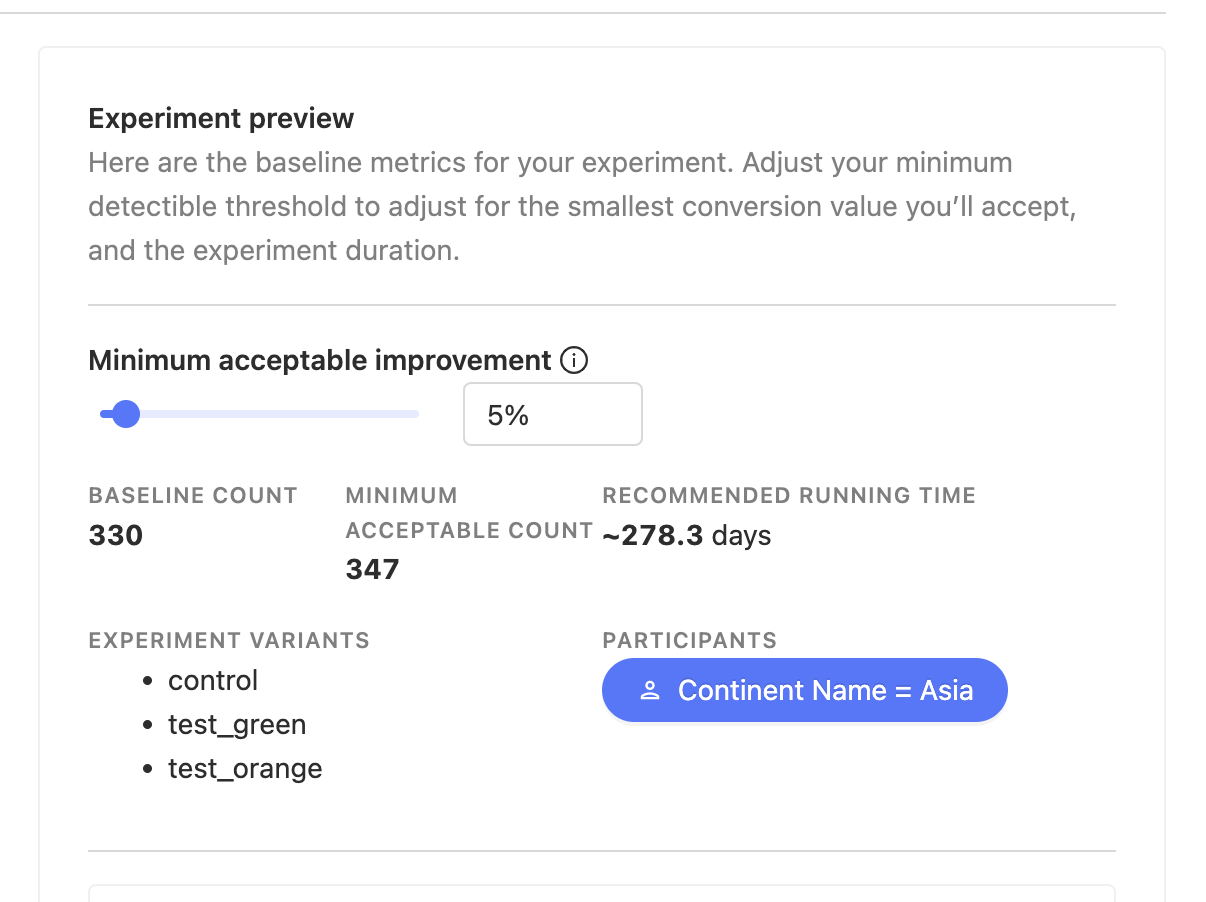 We can also increase or decrease our minimal acceptable improvement depending on how much we care for our test's significance relevant to our other experiment factors.

Perhaps we don't want to wait 278 days for our experiment to run and we'd prefer less precise results in favor of a shorter run time. We can simply bump the threshold to a higher percentage. 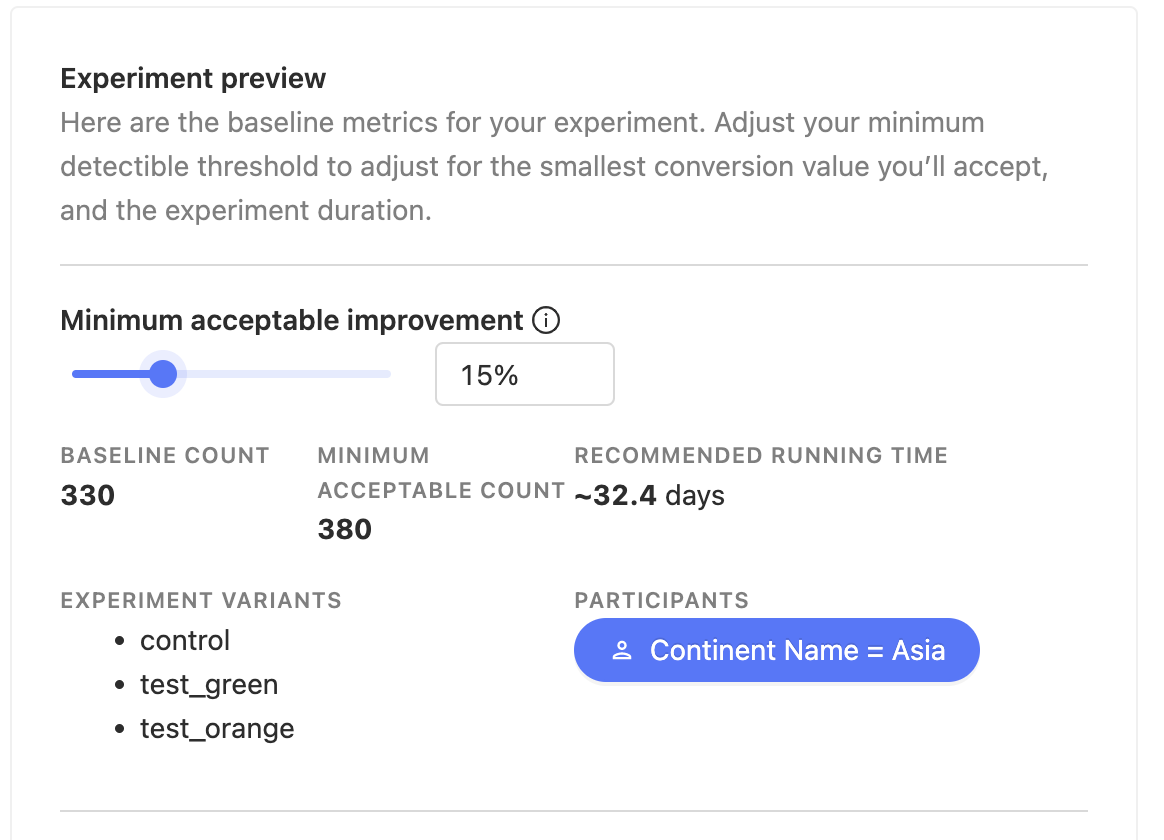 Whenever we're ready, hit save on the bottom right corner of the form to create an experiment. Creating an experiment saves it into a draft mode so we'll still have flexibility on making adjustments to it until we're ready to launch it!

Before you can launch an experiment, you need to implement the code for each feature flag variant. On the draft experiment screen, you'll see a snippet telling you how to query for the variant. It looks something like:

Once you've written your code, it's a good idea to test that each variant behaves as you'd expect. If you find out your implementation had a bug after you've launched the experiment, you lose days of effort as the experiment results can no longer be trusted.

To test your experiment, use the web developer console. The experiment draft screen has a snippet for testing your code. Once you've pushed your experiment code, open the console on your browser, and paste the snippet in. This will override the feature flag for you, and you should be able to see the changes you've made on screen.

Once you're satisfied, you're ready to launch your experiment.

Note: The feature flag is activated only when you launch the experiment.

While the experiment is running, you can see results on the page. Sometimes, in the beginning of an experiment, results can be skewed to one side. For example, if you launched at midnight then people on the other side of the world are active first, and the first few hours of data you collect is all from them. This can artificially skew results to one variant. While possible, it's important that you don't end your experiments at this stage: the results are probably insignificant. This is known as the peeking problem.

While peeking at the results in itself is not a problem, making quick decisions based on preliminary results is problematic. For this reason, we display a banner that informs you whether it's safe to end an experiment or not.

Note that this recommendation doesn't cover all edge cases. It is still possible, when new data comes in, that results flip completely. This is true for any experiments and any significance test in existence today. But, the probability of this happening is very low, which is why most people are comfortable taking this risk. For a 0 risk experiment, you'd have to run it for an infinite amount of time: every new person is new data to be accomodated.

You decide when to terminate an experiment. A banner in your experiment results page will let you know if it's safe to do so, regardless of the original estimated running time. Terminating before significance implies conclusions could be completely wrong. (see Advanced section below to understand how we compute significance)

Once you have decided to terminate an experiment there are a few things to do:

Advanced: What's under the hood?

Below are all formulas and calculations we go through when recommending sample sizes and determining significance.

How we ensure distribution of people

For every experiment, we leverage PostHog's multivariate feature flags. There's one control group, and up to three test groups. Based on their distinctID, each user is randomly distributed into one of these groups. This is stable, so the same users, even when they revisit your page, stay in the same group.

We do this by creating a hash out of the feature flag key and the distinctID. It's worth noting that when you have low data (<1,000 users per variant), the difference in variant exposure can be up to 20%. This means, a test variant could have 800 people only, when control has 1,000.

When you're creating an experiment, we show you recommended running times and sample sizes based on parameters you've chosen.

For trend experiments, we use Lehr's equation as explained here to determine sample sizes.

mde is the minimum acceptable improvement you choose in the UI.

For funnel experiments, we use the general Sample Size Determination formula, with 80% power and 5% significance. The formula then becomes:

where mde is again the minimum detectable effect chosen in the UI.

We give these values as an estimate for how long to run the experiment. It's possible to end experiments before you reach the end, if you see an outsized effect.

Note how the recommended sample size in each case is inversely related to the minimum acceptable improvement. This makes sense, since the smaller the mde, the more sensitive your experiment is, and the more data you need to judge significance.

We follow a mostly bayesian approach to A/B testing. While running any experiment, we calculate two parameters: (1) Probability of each variant being the best, and (2) whether the results are significant or not.

Below are calculations for each kind of experiment.

Trend experiments capture count data. For example, if you want to measure the change in total count of clicks, you'd use this kind of experiment.

We use Monte Carlo simulations to determine the probability of each variant being the best. Every variant can be simulated as a gamma distribution with shape parameter = trend count, and exposure = relative exposure for this variant.

Then, for each variant, we can sample from their distributions and get a count value for each of them.

The probability of a variant being the best is given by:

For calculating significance, we currently measure p-values using a poisson means test. Here's a good primer of the formula. Results are significant when the p-value is less than 0.05

Since count data can be over a total count, vs. the number of unique users, we use a proxy metric to measure exposure: The number of times $feature_flag_called event returns control or test is the respective exposure for the variant. This event is sent automatically when you do: posthog.getFeatureFlag().

It's possible that a variant showing fewer count data can have higher probability, if its exposure is much smaller as well.

Then, for each variant, we can sample from their distributions and get a conversion rate for each of them.

The probability of a variant being the best is given by:

To calculate significance, we calculate the expected loss, as first mentioned in VWO's SmartStats whitepaper.

To do this, we again run a monte carlo simulation, and calculate loss as:

This represents the expected loss in conversion rate if you chose any other variant. If this is below 1%, we declare results as significant.

In the early days of an experiment, data can vary wildly, and sometimes one variant can seem overwhelmingly better. In this case, our significance calculations might say that the results are significant, but this shouldn't be the case, since we need more data.

So, you'll only see the green significance banner when all 3 conditions are met:

Want to know more about what's possible with Experiments in PostHog? Try these tutorials:

Feature Flags allow you to safely deploy and roll back new features. This means you can ship the code for new features and then roll them out to your users in a managed way. If something has goes wrong, you can then roll back without having to re-deploy your application. Feature Flags can also help you control access to certain parts of your product, such as only showing paid features to users with an active subscription. Looking to test changes to your product? Check out our Experimentation…