Who we do business with

As a developer-focused company, Developer Relations is an important area to us. Beyond being a developer-focused product, an appropriate PostHog setup requires that the customer, at a minimum, integrate a PostHog library into their codebase. Additionally, engineers may also step in to:

Finally, as an open core company with a large and well-established MIT-licensed offering, we are also in close contact with developers via:

As a result, developers/engineers are a core part of our userbase and community, making them a key component of our success.

This page provides some insight into what Developer Relations at PostHog entails in the near to medium term.

Developer Relations can be a confusing space, with a lot of controversy and disagreements about taxonomy.

For us, the most important thing is that we have our own structure for conceptualizing this rather than seeking an absolute truth. At the end of the day, every company approaches DevRel differently.

At PostHog, we see "Developer Relations" as intersecting Product, Engineering, and Marketing. This is reflected in the work we do and the skills that people have who take on DevRel roles here. 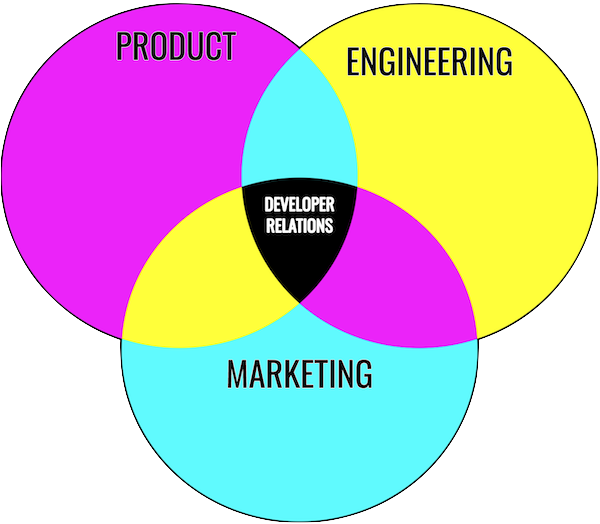 Near to medium-term focus

There won't be a "DevRel" team at PostHog, and we'll instead see DevRel as a function that operates as more of a "guild". Instead, DevRel roles will reside within small teams, providing DevRel skills to those teams as they need them. In the longer-term, teams may be formed that consist mainly of DevRel roles focusing on experience, education, and marketing.

Our near to medium-term focus is as follows, in priority order:

There presently is no plan to look at API standards, OpenAPI specs, SDK, or other developer enabling tools. This plan may change.

The near term focus for Developer Relations at PostHog is to improve the educational content available to developers. We broadly define this as Education with the specifics in the near term being the PostHog documentation and enabling our existing customer base, making it easier for Data Engineers to integrate with PostHog. This includes:

We're hiring a Developer Educator to help us execute on this.

We have a thriving community across Slack (link will launch the PostHog community Slack) and GitHub. We have programs in place to gather feedback, encourage and manage contribution, and reward positive community activities. But we feel we can do more. Examples of the type of things we're looking at doing here include

To support and own this effort, we've proposed the hiring of a Community Programs Manager (internal link).

We've identified that people in Data Engineering roles introduce PostHog into their organizations. PostHog is introduced so that Data Engineers can focus on more complex data engineering tasks beyond writing SQL so that Product Managers and other less hands-on-data roles can analyze product usage. However, Data Engineers don't continuously use PostHog. This means there's definite value in Data Engineers being aware of PostHog, but there isn't a significant benefit from external community engagement. There is an option to advocate and educate developers on data warehouses within external communities, but then awareness of PostHog is only raised indirectly. We are running a Data Engineering newsletter sponsorship experiment (internal link), but we'd also like to find an audience that directly benefits from PostHog first.

We hypothesize that a target persona for Developer Relations should be software engineers/software developers and are product minded. They may identify as a "Product Engineer". This type of person will directly benefit from PostHog and use PostHog nearly daily as they build features and analyze their success.

Once we've hired a Developer Educator and Community Programs Manager, we'll begin to experiment with reaching Product Engineers. To do this, we'll demonstrate how PostHog helps developers who are building on and using Jamstack-focused technologies such as Next.js, Gatsby, Sanity, Supabase, Netlify, and Vercel.

If you believe that your community members would benefit from PostHog, get in touch.

At PostHog, we work in the open. As such, expect pull requests and updates to this page as we work to further define, build, and execute Developer Relations @ PostHog.